I felt it was very important for Dana to be a part of the After the Abortion photography series. For women who are struggling with forgiveness after one abortion, you can know that, if God can forgive Dana, He can forgive you! If you will come to Him, you will find forgiveness and healing, just like Dana. Our God is so merciful!

I don’t normally include the whole story in these posts, but I felt that Dana’s whole story needed to be heard (below). Thank you, Dana, for your heart…and thank you for flying all the way from Florida to be a part of the After the Abortion photography series! 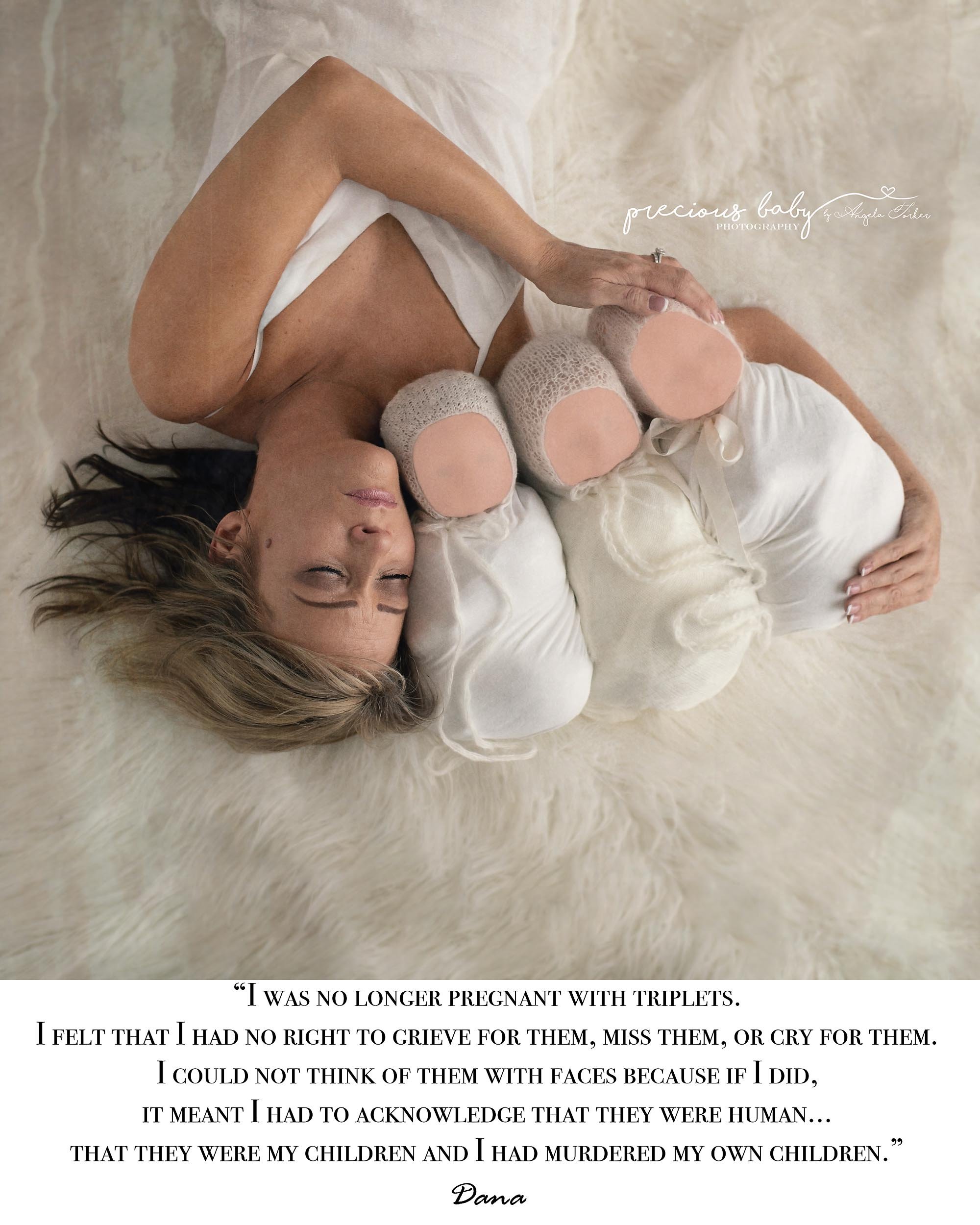 “My name is Dana. It was Summer of 2005, I was 30 years old, mother of a wonderful 7 year old son. I was also separated, preparing to divorce my husband of almost 10 years. During my separation I re-friended an old childhood friend who was struggling with drug addiction. This relationship turned sexual very quickly and of course that then moved on to a series of bad decisions..in turn changing the course of my life forever and everything I knew to be true about myself, the world and people around me and most of all God!

In the fall of 2005 I discovered that I was pregnant with that old friends child. This pregnancy was very different than my first. I was unusually sick all the time, all day, everyday. Some days, I could barely get out of bed. I knew something was off..there was something very different. The Doctor kept trying to reassure me that I was just pregnant and that all was fine. Over the next few weeks I was still very ill and my belly was growing quickly. Finally, I was sent in for an ultrasound.

During the ultrasound, the technician looked at me, grabbed my hand and proceeded to ask me “what kind of fertility drugs are you taking”? Shocked that she would ask me that, I said “well none, this was not planned”. As she held my hand, she said very calmly, “well honey, you are not sick, you just have 3 babies in your belly”. I was in complete disbelief..just shock.

I left there that day and immediately called my mother. I could not believe that I was having 3 babies. I was having triplets. Shortly after, I moved back in with my Parents and began to mentally prepare myself for the craziness that was about to be my life as I also knew that I was going to be raising my children alone. I was going to be Mom and Dad and I was terrified. “Three of everything” my mother kept saying.

Several weeks later, out of the blue, I received a phone call….it was discovered that the father of my children had been using intravenous needles to inject illegal drugs into his body. This person thought that I needed to know.

IMMEDIATELY, the fear set in. The fear that, oh my God, “There is going to be something wrong with my children”. In my mind, I thought HIS drug addiction and abuse had somehow affected the health of my children. I could not get these horrible thoughts out of my head. Then, that’s when the thoughts of Abortion entered my mind and I told no one at least not right away.

Fast forward a couple of weeks, I was 4 months pregnant and I had made my decision. I was going to have an abortion. I woke up my Parents up at 4 in the morning and told them that I wanted to have an abortion. I will never forget the look on my Mothers face, she was mortified. My mother did not want me to have the abortion, she never tried to change my mind though, she just said, “although I do not agree with your decision, I’m not going to let you go through it by yourself.

The next day I called a clinic that was two hours away from my house. I made an appointment, and that next day, my Mother and I drove to a clinic that was four hours round trip because I was worried that if I did it locally, someone I knew would see me coming out of the clinic and know what I had done.

When I arrived to the clinic I was shaking and crying, I just couldn’t stop. I thought it was just nerves and fear. The nurse said they will give me something to relax me shortly. They gave me a blue piece of paper with some information on it and a place to sign on the bottom along with some other paper work for me to fill out. I asked the nurse “since there are three babies, would it be more difficult”, she said no.

A little while later, they called us back. I was in a room with a hospital bed, two machines, one of them being an ultra sound machine and a chair for my mother to sit next to me. They gave me this fluid to drink to relax me and the next thing I know I was waking up in a fancy white recliner chair accompanied by some other woman also in fancy, white recliner chairs. When I woke up I remember the lady saying “you are not pregnant anymore”.

I sat there a while longer in recovery. Later, they gave me my aftercare instructions along with antibiotics and sent me home. I was no longer pregnant with triplets, ‘Good luck to you they said’. On the way home, I will never forget my Mothers words to me…She said, “I don’t ever want to see something like that as long as I live”. It was not until years later that I knew exactly what she meant by that.

However, one week after, I was still bleeding very heavily. I called the clinic and they instructed me to come back to the clinic so they could do an ultra sound to check things out because I should not still be bleeding. I drove the 2 hours back there only to find out after the ultra sound that I basically had to have another abortion because I still had pieces of my babies that were left in my body.

After the abortion, I knew very quickly that I wanted to change my mind. Oh my God, what did I do?
I wanted to grieve for my children but I felt so much guilt and shame would not allow me to. How could I have the right to grieve for the loss of my children when I am the one who killed them.

Knowing that I made the wrong decision and not being able to do anything about it. God, why didn’t I just think on it a few more days?

Several years have now gone by, I have since found happiness again and God has blessed me with a daughter. I truly am blessed, but my sin and the memory of my children still haunted me, daily.
So that led me to reach out to God the Father. I sat on my porch one night and proceeded to conversate with God like He was a regular person sitting in front of me.

One day after many conversations with God and wondering how I could ever be saved and how could God ever love me or forgive me after what I had done? How could God love me after I killed His most innocent? God, how can I deserve Your love or forgiveness?

That’s when God put me out of my comfort zone and proceeded to lead me on a journey that would eventually lead me right into the arms of Jesus and forgiveness.

I started researching abortion, anything and everything I could read and watch because I wanted to know everything about it.

That’s when I watched the first video of how an abortion is performed on a woman like myself who was 4 months pregnant. The day that I watched that video for the first time was in fact the day I knew exactly what my Mothers words meant all those years ago in the car on the ride home.. Because I also learned what that other machine in the room was that day besides the ultrasound machine. It was essentially a vacuum that would be used to suck my children out of my body…And my mother had witnessed it all. I watched that video over and over again until I felt I could fully grasp what I had done. .
As hard as it was for me, I needed to see what my children went through. I had to know. I had to know if they suffered, I had to know if they felt pain…I had to know what they went through. I WANTED TO GET AS CLOSE TO THEIR PAIN AND SUFFERING AS I COULD. And I did. That was the day I realized that my babies did in fact suffer and that yes, they struggled. They suffered as they struggled and fought to stay with their Mommy that day… Even as I was trying to let them go, They still wanted their Mommy.

Gods grace and forgiveness has brought me to a place of peace where I can now think of my children with faces and running around in the Heavens with Jesus…playing, smiling and laughing as children do. I do believe that when I leave this earth, my earthly children will release me from my earthly life into the arms of my heavenly children as they welcome me home.“